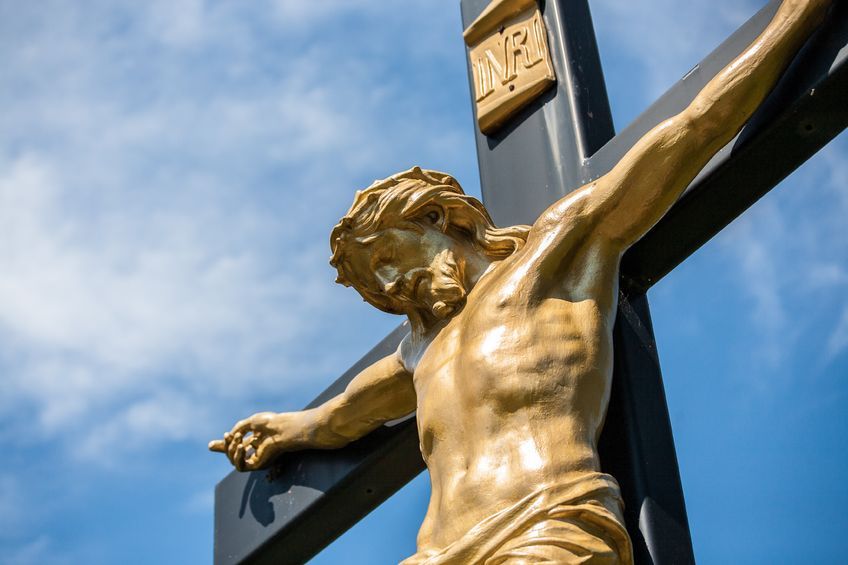 Through the death of our Lord Jesus Christ on Good Friday, we were redeemed from our sins. It is the most solemn day of the Christian year.

Here are some important things to know about Good Friday:

“Good Friday”, why is it called that?

A lot of people assume it is called Good Friday because a very “Good” thing happened on that day (our redemption).
Even though “Good” has a simple definition and is a common word, that is not really where the name came from, however, the actual origin is disputed.

The origin of the term “Good” is not clear. Some say it is from “God’s Friday” (Gottes Freitag); others maintain that it is from the German Gute Freitag, and not specially English.

It is also argued that the name is based on a Medieval use of the word good where it meant “holy.” Thus “Good Friday” would have come from “Holy Friday,” the same way we have Holy Thursday and Holy Saturday.

The first Good Friday, what happened then?

At night, Jesus was brought before the high priests Annas and Caiaphas after his arrest. This was when Peter denied him.

According to the gospels, Jesus:

Was taken before Pilate in the morning,
Sent to Herod,
Returned to Pilate,
Was mocked and beaten,
Saw Barabbas released in his stead,
Was crowned with thorns,
Was condemned to death,
Carried the crushing burden of his cross,
Told the weeping women what would happen in the future,
Was crucified between two thieves,
Forgave those who crucified him,
Entrusted the Virgin Mary to the beloved disciple,
Assured the good thief of his salvation,
Said his famous seven last words,
Cried out and died,
There was darkness over the land,
There was an earthquake,
The veil of the temple was torn in two,
Many saints of the Old Testament period were raised,
A soldier pierced Christ’s side and blood and water flowed out,
Joseph of Arimathea and Nicodemus went to Pilate and asked for Jesus’ body,
He was buried in Joseph’s own tomb,
A guard was set over the tomb,
All Jesus’ friends and family grieved at his death.

If you would like to read from your bible, please refer to:

How is Good Friday celebrated today?

According to the main document governing the celebrations connected with Easter, Paschales Solemnitatis:

meditates on the passion of her Lord and Spouse,
adores the cross,
commemorates her origin from the side of Christ asleep on the cross,
and intercedes for the salvation of the whole world.

Fasting and abstinence, are they really required on Good Friday?

The Sacraments, are they or are they not celebrated on Good Friday?

For the most part, no. Good Friday is the only day of the year on which the celebration of Mass is forbidden.

Holy Communion is distributed to the faithful during the Celebration of the Lord’s Passion alone, though it may be brought at any time of the day to the sick who cannot take part in the celebration.

Funerals are to be celebrated without singing, music, or the tolling of bells, and

Baptism in danger of death is also permitted.

The Celebration of the Lord’s Passion is the main one. It includes:

A liturgy of the word,
The adoration of the cross and
A Communion service using hosts already consecrated.

The time will be chosen which seems most appropriate for pastoral reasons in order to allow the people to assemble more easily, for example shortly after midday, or in the late evening, however not later than nine o’clock.

The Veneration of the Cross, How should it be done?

The rite should be carried out with the splendor worthy of the mystery of our salvation: both the invitation pronounced at the unveiling of the cross, and the people’s response should be made in song, and a period of respectful silence is to be observed after each act of veneration—the celebrant standing and holding the raised cross.

Only one cross should be used for the veneration, as this contributes to the full symbolism of the rite.

During the veneration of the cross the antiphons, “Reproaches,” and hymns should be sung, so that the history of salvation be commemorated through song. Other appropriate songs may also be sung (cf. n. 42).

After the Celebration of the Lord’s Passion, What happens next?
Paschales Solemnitatis notes:

An appropriate place (for example, the chapel of repose used for reservation of the Eucharist on Maundy Thursday) can be prepared within the church, and there the Lord’s cross is placed so that the faithful may venerate and kiss it, and spend some time in meditation.

Are other devotions appropriate to Good Friday?

The texts and songs used, however, should be adapted to the spirit of the Liturgy of this day.

Such devotions should be assigned to a time of day that makes it quite clear that the Liturgical celebration by its very nature far surpasses them in importance.