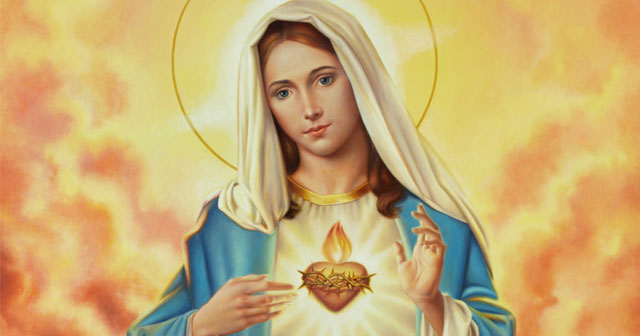 26 Powerful Names of Mary (Including their Origin and Meaning)

Genetically, Mary contributed half of Jesus’ genetic matter by participating in His human creation and carrying His human body. She is not divine, but her Son is. Therefore, she is Theotokos, literally meaning “God-bearer”. We celebrate her feast day on January 1

In order to carry the Son of God, Mary needed to be a virgin for many reasons, which are listed in the Catechism of the Catholic Church. Jesus needed to never be estranged from the Father, so there would be no doubt that He came from the Father and not another human man (CCC 503).

This keeps his divinity. Mary’s virginity is also a sign of her faith and undivided gift of herself to God’s will (CCC 506). And Mary is the symbol and perfect realization of the Church, “who keeps in its entirety and purity the faith she pledged to her spouse” (CCC 507)

3. Mother of the Church

When Mary was called during the Annunciation, she gave her consent to the coming messianic kingdom, which would ultimately be the formation of the Church. She was also present with the apostles praying in the upper room when the Holy Spirit descended on them, giving birth to the new Church here on Earth. Each member of the of the Body of Christ is a part of her Son, and she wraps us in her mantle and protects us from evil.

Mary received distinctive blessings so that she could be the most fitted mother for Christ, this includes her Immaculate Conception, her spiritual motherhood of all Christians, and Assumption into heaven. She is Full of Grace because she was saved before birth, whereas we are saved after we are baptized with the Holy Spirit.

Mary was given this name after this painting was said to be miraculous. According to tradition, the townfolk heard suddenly “exquisite music” and a mysterious cloud descended and obliterated an unfinished wall of the parish. The cloud dissipated and revealed the beautiful fresco of the Virgin Mary and Christ Child

Mary is full of grace, mercy and compassion, she is not only able, but willing to supply mercy to all who invoke her sweet name. Mercy is “a heart for the miserable” and Mary has a particular sympathy and compassion for those suffering souls in Purgatory. She presents our prayers, along with hers, to her Son to release the souls from Purgatory

Just as a mirror reflects your image, Mary was the reflection of Jesus, the one who came to justify us all. Justice is the perfect state of the soul, completion of all virtues. And just as a clean, flawless mirror reflects a perfect image, she reflected the virtues of Jesus perfectly.

Mary is the Seat of Wisdom because wisdom became incarnate in her son Jesus whom she carried. She also possessed and practiced true wisdom, not the wisdom of this world

Mary has shown us that the rose is her favorite flower, through the mysterious roses that Juan Diego picked before giving him her image on his tilma, to the garland of roses she wore during her apparitions at La Sallette, to the beautiful roses she brought at Lourdes, Pontmain, Pellevoisin, Beauaing and Banneaux. It is said, for every Hail Mary we say, is like placing a rose at her feet

The Tower of David was one of great strength and beauty and used for the defense of the city of Jerusalem during King David’s reign. Mary is a symbol of the tower because of the virtues which she presented in beauty and strength. She also defended and protected her Son, and continues to defend and protect us, His brothers and sisters

Ivory has long been a symbol of peace, wealth and joyous feasting. It is through the wealth of grace that we are brought into union of God through Mary

Jesus told us that we can only get to the Father through the Son, but Jesus had to get to us through his Mother, Mary. Therefore, she is called the “Gate of Heaven” because she delivered Jesus to us.

As the “morning star” shines brightly before the sun rises, so Mary as Mother of Jesus, who is the Light of the World (the Sun) preceded his coming

Mary is referred to as the Immaculate Conception because when she was conceived by her parents, she was given the grace of being saved by Christ before she was born. She was redeemed and remained sinless from the moment of her conception throughout her life.

16. Comforter of the Afflicted

During our time of sorrows and pain, we need to ask Mary to wrap us in her mantle just as she did to protect Jesus when she and Joseph fled to Egypt. She, in watching her Son be sacrificed before her on the Cross, knows what true sorrow, heartbreak and sadness. She understands our pain and can comfort us in our sorrow and trials

When the mother of God is seated on her throne beside her Divine Son, it is the angels who are often envisioned as placing her crown upon her head. The name is also tied to the Assumption of Mary into Heaven, and described in Revelation as “a woman clothed with the sun, the head a crown of twelve stars.” (Rev. 12:1)

None of the saints became saints without a devotion to the one whom Jesus came to us through. She was the one who carried and cared for our Lord throughout His life, and was a perfect example of a saintly life, here on earth and in Heaven.

The kings of Judah could have multiple wives, but they only had one mother – the queen mother. She was the most important and influential women in the royal court. A king would always listen to his mother! Jesus’ bride is the Universal Church. He is the King of kings, which would make Mary, the Queen of Heaven.

20. Queen of the Holy Rosary

The use of “prayer beads” and repeated prayers has been a long time practice from the earliest of days from the Church. The Rosary as we know it is credited to a vision given to St. Dominic. In 1571, Pope Pius V asked the faithful to pray the rosary in preparation for battle, and ask the Lord for victory to the Christians against the Moslem. Although outnumbered, the Christians won and thanks were given to the Lord and the powerful intercession of our Blessed Mother

Eve, by her disobedience tied the human race into the knots of sin, conversely, Mary, through her obedience to the will of the Father unties these knots

The title of Mother Most Sorrowful comes from the ancient devotion to Our Lady’s seven sorrows. Mary Most Sorrowful is traditionally depicted with seven swords in her heart or the image of the pieta as is seen above.

Perhaps the most popular Marian devotion in Germany, Mary as Mother Thrice Admirable is the patroness of the Schonstatt community. According to Fr. Kenntenich, founder of Schonstattt, Mary is thrice admirable because she is Mother of God, the Mother of Christ, and the Mother of all human beings

This title for Mary takes its name from the icon pictured above, purportedly painted by St. Luke whilst Mary was still living on Earth. According to tradition, Mary is said to have stated that her grace will always accompany this icon

Just as Mary sheltered the Christ Child within her womb, so do does she offer a safe haven for all of us sinners who seek her intercession. Although Jesus Christ remains our only mediator and advocate with the Father, Mary is the intermediary between a sinful world and her most beloved Son